It is planned that in 2025 a new cargo and passenger (RoPax) as well as a cruise ship terminal will start operating in the southern part of the Riga Export Port, which will significantly increase the competitiveness of the Port of Riga.

This is stated in an interview by DB Jūlija Bērziņa, RoPax terminal project manager. She says that currently Deloitte has forecast that the implementation of this project will increase the number of passengers served at the Freeport of Riga by 8% annually, but the volume of ro-ro (roll-on roll-off) cargo – by up to 10%. The forecasts of the developers of the RoPax project are slightly more conservative, they forecast an increase of 5% and 3%, respectively.

Excerpt from the interview

At present, a memorandum of understanding has been concluded between the Freeport of Riga Authority and JSC Riga 1st Freezer as the developer of the RoPax project in order to establish a new ro-ro cargo and passenger (RoPax) and cruise ship terminals. Why do we need a new terminal now?

There are several reasons for developing the RoPax project. Those who have happened to be in the port of Riga will definitely agree that the terminal is currently visually obsolete and with technically limited capacity. Namely, both the length of the berths and the turnaround pool are limited, which does not allow to accommodate large ships in the port. It should be noted that a large part of the ferry line’s business is the transportation of trucks, which, when going to the port, currently causes pollution in the center of Riga. For several years now, there has been talk of releasing the center of Riga from trucks, so it must be understood that in the future the old terminal in the center will not be able to continue operating. In order to reduce air and sound pollution in the city center, as well as to ensure the release of the center of Riga from the truck, the existing passenger terminal should be relocated in any case.

Another important aspect in this case is the development of the railway infrastructure project Rail Baltica, where we are already seeing rapid progress. Simultaneously with the development of two passenger infrastructure objects – the central station and the passenger terminal – there is an opportunity to increase the competitiveness of the Port of Riga, including in the future establishing a connection between the passenger terminal, the central station, the airport and the cruise ship port. Our goal is also to create a passenger terminal equivalent to Riga Airport and the new railway station, ensuring that high-level passenger infrastructure for all modes of transport is available in Riga.

At what stage is the project now – what has already been done and what remains to be done?

In 2018, the development of a local plan was started with the aim to allow the reception of ferries in this place – in the southern part of the Export Port. This process is still ongoing, and we currently forecast that the Riga City Council could approve the relevant local plan in the next six months. In 2019, in cooperation with foreign designers, we also developed a sketch project for the terminal building and the attached territory, while last year we signed a letter of intent with the Freeport of Riga and a private partner for the terminal, as well as a business plan for the RoPax terminal project. It must be said that we have done a lot this year, including market research in cooperation with Deloitte, analyzing the future potential of the project. The main conclusion is that the construction of this terminal will definitely promote the competitiveness of the Port of Riga. Deloitte estimates that the project will increase passenger numbers by 8% and ro-ro cargo by as much as 10%. Although our own forecasts are slightly more conservative, we expect growth of 5% and 3% in each segment, respectively. If we talk about what has already been done, we must also mention the fact that in developing the vision of the RoPax terminal, we have come to additional functionality – not only the service of ferry lines, but also the development of the ro-ro cargo segment and the operation of cruise ships. Therefore, we have now concluded an agreement on the renewal of the sketch project of the RoPax terminal in accordance with the intended functions. Our main goal next year is to complete the development of a local plan, to develop a sketch project for the RoPax terminal and a cooperation offer for ferry and cruise lines, as well as to start work on the procurement of design services, arranging documents and attracting financing. We currently plan that the terminal could start operating in 2025, however, it depends on the fulfillment of several preconditions – approval of the respective local plan, as well as development of a common vision and attraction of financing of the involved partners – Riga City Council, Freeport of Riga Authority and private partner.

How much do you plan to invest in setting up RoPax?

At the moment, I can only give approximate figures, because the costs depend on the technical solutions, the intended functionality and the stages of project implementation. We estimate that the construction of the new terminal will require approximately EUR 70 million, but this amount is subject to change. 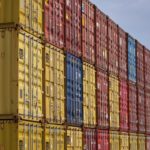 Changes in Eurovignettes. What do road hauliers need to know?